Smoking is the leading cause of preventable death in the United States [1]. Smoking cigarettes harms nearly every organ of the body and leads to disease and disability including cancer, heart disease, stroke, diabetes, emphysema and bronchitis [2]. On average, cigarette smokers die 10 years earlier than nonsmokers [3].

The DC Healthy People 2020 goal for this topic area is:

1. Illness, disability and death related to tobacco use and second hand smoke exposure are minimized 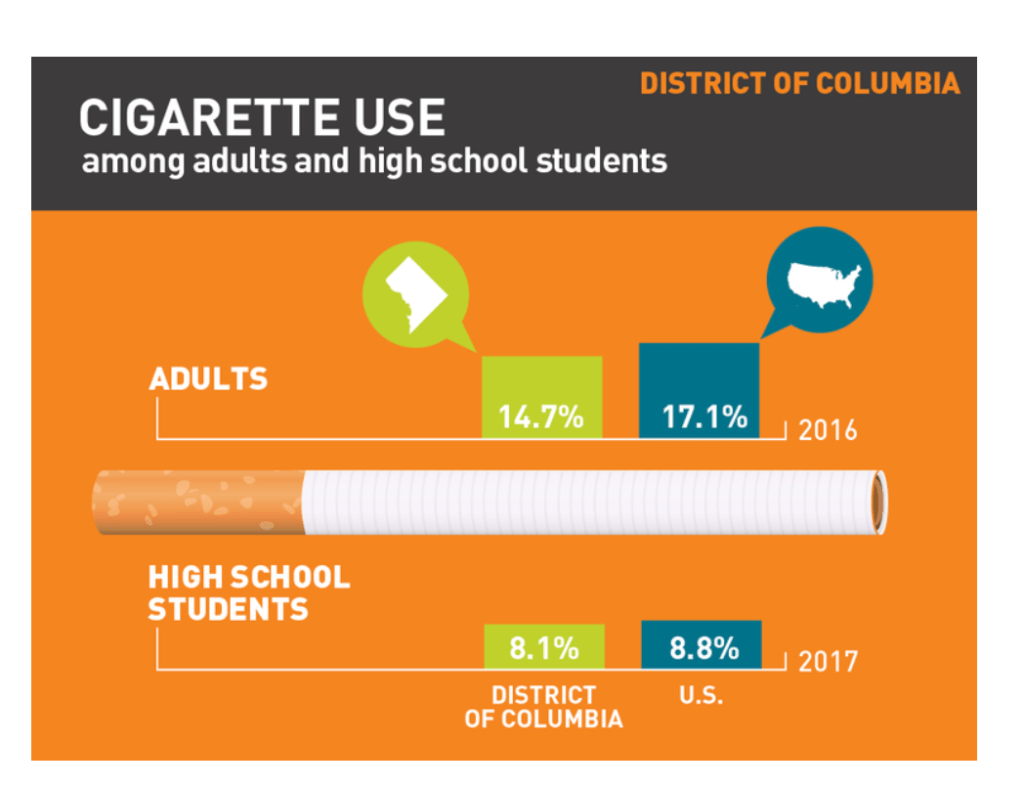 Although cigarette smoking has declined significantly over the past five decades, there are persistent disparities in tobacco use across groups defined by race, ethnicity, educational level, and socioeconomic status.

In the District, residents who are more likely to be current smokers include [4]:
• Men

• Adults with less than a high school education

The most common source of secondhand smoke is cigarettes, followed by cigars, pipes and other tobacco products. Exposure to secondhand smoke can occur in homes, cars, workplaces or public places such as recreational settings.

Contrasting the decline in cigarette use are the increasingly popular methods of tobacco use including hookah and e-cigarettes. E-cigarettes are perceived as less harmful than traditional cigarettes; however, there are similar risks associated with their use. E-cigarettes have not been approved by the FDA as a smoking cessation tool.

Hookah is a water pipe that is used to smoke flavored tobacco [4]. It’s a popular misconception that hookah is less harmful than other tobacco products however, hookah smoking has many of the same health risks associated with cigarette smoking [4]. In 2016, 29.3% of adults in the District reported ever smoking hookah.

E-cigarettes are commonly known as vape pens, e-cigs, mods or tank systems. These devices heat a liquid, usually including nicotine, flavoring, and other additives, into an aerosol/vapor that the user inhales [7]. The nicotine in e-cigarettes, like regular cigarettes, is addictive. Nicotine exposure during adolescence and young adulthood is particularly a risk that can cause addiction and harm the developing brain [7].

In September 2019, DC Health notified residents that until the U.S. Centers for Disease Control (CDC) and U.S. Food and Drug Administration (FDA) determine the cause of over 450 possible cases of lung illness associated with the use of e-cigarette products in 33 states, e-cigarettes or vaping products should not be used. Residents should not buy products off the street or add substances not intended by the manufacturer.  To date, DC Health has confirmed one death associated with vaping.

Symptoms of vaping-associated lung injury include:

• Many patients have reported initial symptoms such as unexplained weight loss, fatigue, abdominal pain, or fever; 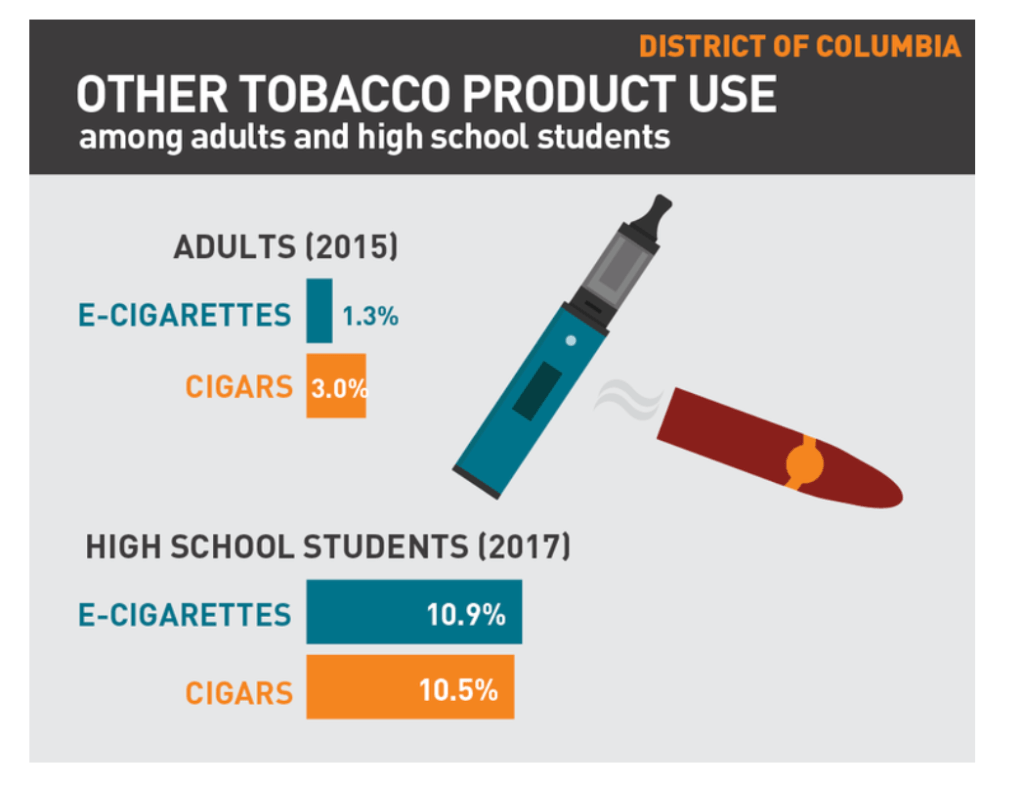 Some e-cigarettes looks like regular cigarettes, cigars, or pipes. Some look like USB flash drives, pens, and other everyday items. Many e-cigarettes and vaping materials contain harmful or potentially harmful substances, and it is difficult to know what each individual product contains.

Smoke-free policies have been strengthened in the District, as in the US, however the District lags slightly behind in the percent of homes that have smoke-free rules (83.3% for the District and 85.8% for the US, though the difference is not statistically significant).

The District will also soon be collecting information from residents via the Adult Tobacco Survey which will increase the data availability around tobacco use behaviors.

Tobacco taxes have proven an important policy lever to deter residents from purchasing tobacco products.  DC ranks 13th in the amount of tax the city charges per pack of cigarettes. 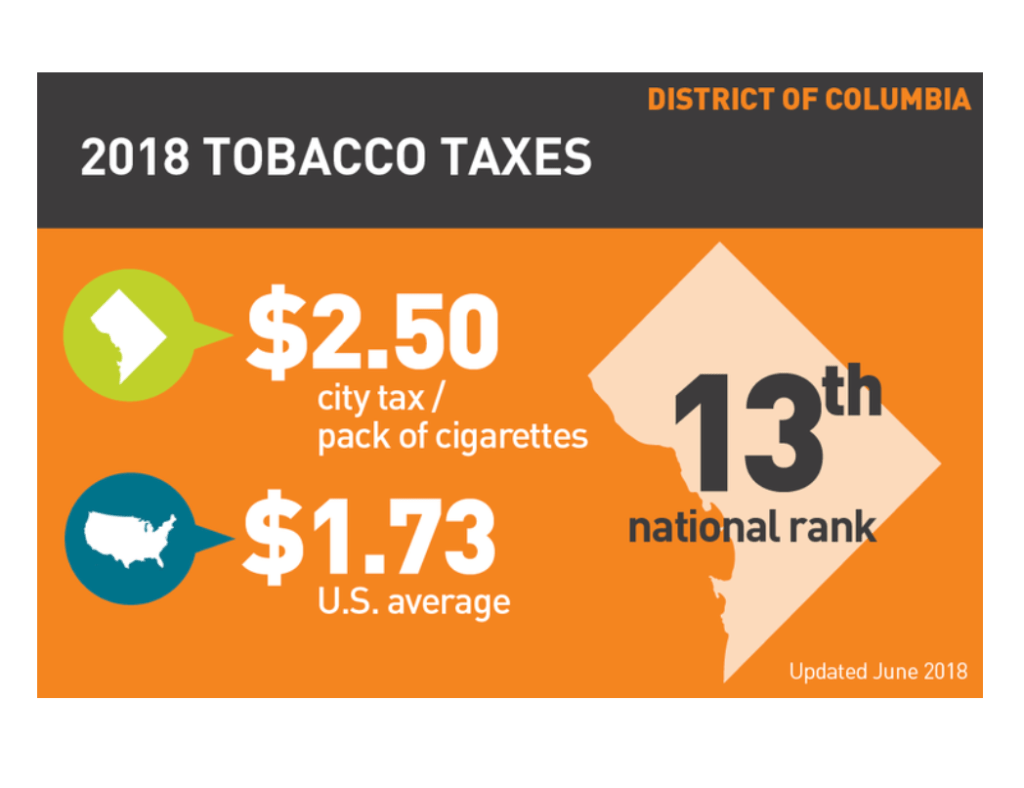 Some tobacco policies and enforcement can disproportionately affect specific populations. For example, the District has a law against smoking at bus stops. However, the neighborhoods and income levels where residents most often take the bus are comprised largely of populations of color.

Since the relationship between communities of color and law enforcement needs to be strengthened, punitive or excessive enforcement of no smoking laws could do more harm than good

Policies that have fewer negative impacts on populations, such as barrier-free access to tobacco cessation counseling and medications (CDC) should be widely supported.

In response to recent illnesses and deaths linked to vaping, in September 2019, two new bills have been introduced by DC lawmakers to further regulate e-cigarettes. DC law already prohibits the sale of vaping products to anyone under the age of 21, the new bills propose banning flavored e-cigarettes and requiring a prescription to purchase other electronic smoking products. [8]

• CDC’s You Can Quit Smoking

• How to Quit – Government Resources (CDC)

• Innovative ways a DC consortium is tackling tobacco use disparities

7. U.S. Surgeon General. The Facts on E-Cigarette Use Among Youth and Young Adults. 2019.

8. The DCist. The DC Council Will Consider Two Bills to Crack Down on Vaping. 2019

Photo by Stephen Hocking on Unsplash